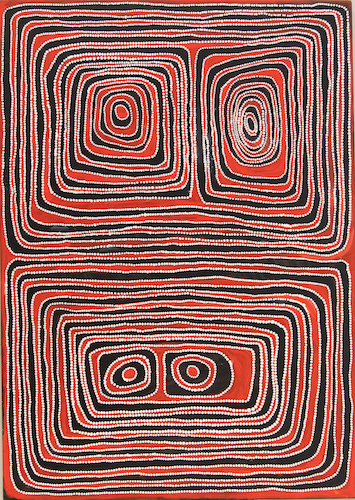 HomeGalleryExhibitionsNewsContact Details of Jimmy (Mawukura) Nerrimah About Mawukura is a Walmajarri man. His country is around Wayampajarti, a waterhole in the north western area of the Great Sandy Desert. He was born near a waterhole called Wili, at a swamp called Miyitinynanguwu. He calls the names of places such as Tapu, Kurrjalpartu, Kayalijarti, Kurraly Kurraly, Walypa, Wayampajarti, Kumpujarti and Witikarrijarti as the main waterholes in his country. He grew up in the desert moving around these waterholes. Mawukura was nearly a man when his father brought him to the station country to escape a very large fire that was burning in his country around Tapu. He went through law at Lumpu Lumpu and then went back to the desert with his father in law where he lived for around five more years. The police came around there once he says but they did not pick him up, they gave him food. The police continued on but they were frightened by kalpurtu so they kept gong, straight back to town. The same police picked up Huey Bent and took him to Cherrabun Station not long after. Mawukura eventually left the bush possibly in the early sixties. After coming in from the desert, Jimmy spent most of his time working on Nerrimah Station. Collections Levy Kaplan Collection, Seattle USA Thomas Vroom Collection, Amsterdam National Gallery of Australia Art Gallery of Western Australia Gabrielle Pizzi Ian & Sue Berndt Collections Wesfarmers Ltd