Milingimbi is a small island off the north-east Arnhem Land coast. The community has developed from one of the earliest established missions in Arnhem Land established in1923. It comprises Aboriginal people from up to 16 language groups and has a permanent and transitory population of between 1000 and 1500 people. Local cultural law and traditional ceremonial practice is still very strong in the community.

Bark paintings from Milingimbi (together with weapons, artefacts, utensils and ceremonial sculptures) were collected by American sociologist W. Lloyd Warner who studied the community from 1926 â€“ 29. Production of artworks, specifically for sale rather than for ceremonial or cultural practice, was begun at both Milingimbi and Yirrkala from 1950, and one missionary Douglas Tuffin in Yirrkala began, in 1954, to foster the visual arts and pay returns in cash.

Milingimbi has a proud history of arts practice. The fifties were â€˜to be artistically formative yearsâ€™ during which Rev. Edgar Wells supported the industry of creating bark paintings, wood sculptures, and other art and craft items for commercial sale. In 1961 missionary Alan Fidock came to Milingimbi as a teacher and stayed for ten years, one of his roles being as the art agent for local painters. During this decade the first major exhibitions of bark paintings were held. It is recorded in 1971 the population of Milingimbi was 852 people and sales of art produced in the community was $22,000.

Today there is a strong core group of artists living in Milingimbi and its outstations. Artists continue to produce works on bark, carvings, Larrakitj (hollow logs), woven objects including mats, baskets and fish traps, and other smaller craft items such as shell jewellery 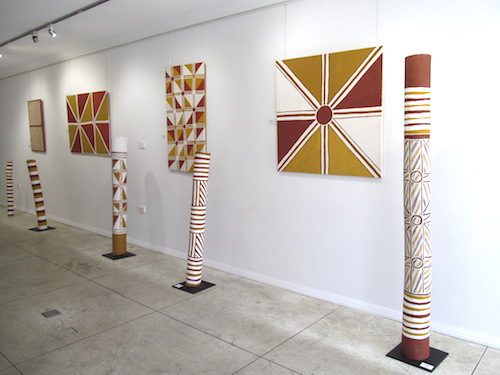