The remembered hues of a lifetime 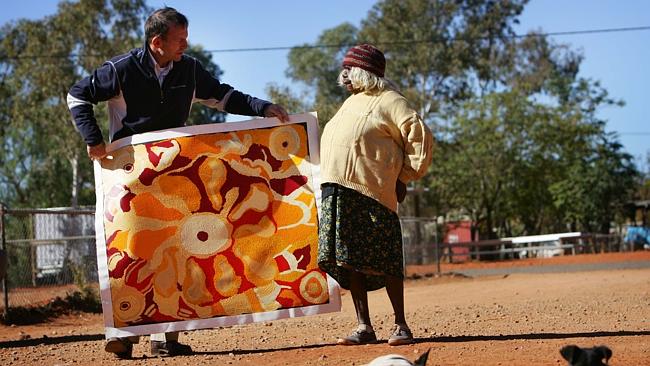 WHERE do they come from, the swaths of dust-pink and dazzling white, the arcs of mauve and porphyry and pale pastel blue? When did Angkaliya Curtis, the master colourist of western desert art-making, first see those hues in nature and become fascinated by their contrasts and their interplay? In her childhood, when she was being raised by her family group, in deep bush, around the site of Miti, in the Pitjantjatjara desertâ€™s most far-flung quarter, a full eight decades ago.

That country, a wilderness to European eyes, was a garden to her: a paradise. The landscape was full of plants and animals. The light was always shifting, changing: in the low ranges close by, the rocks went from the red-brown of a kangarooâ€™s coat to dark purple, then to the deep shade of bloodwood as each day wore on; the clouds would gleam like flames at every sunset; there were green and black reflections in the trap-rock waters as night began to fall.

â€œWhen I was young,â€ says Angkaliya, â€œI used to play in the sand dunes, and I would see everything around me: the birds in flight, the lizards and their tracks. In the sky there were Â­eagles and crows, I saw the ducks that used to visit the creeks: that desert was full of life. I used to know that country very well â€” and all its changing colours, theyâ€™re in my paintings now.â€

Those paintings are unlike anything else in western desert art, both in their treatment of their subject matter and their Â­distinctive style. They are encyclopedias of the dune country and all it holds, but also recollections of a life.

Angkaliyaâ€™s education was old school. From the women around her she learned how to collect bush figs and raisins, how to dig in the red earth for honey ants, how to make the irmangka-irmangka desert medicine. She became adept in carving coolamons and digging sticks, and building Â­shelters and wind breaks. These elements surface in her works: Â­little emblems from early days.

When she was still a young woman, her family began making visits to Ernabella in the east to trade dingo pelts and rabbit skins. Later, the Ernabella mission became her home: she married and lived there, and began working in the craft shop, adapting her bush skills to wool spinning and to making rugs. By the late 1960s, she had moved on to the new community at Amata, closer to her own country.

Desert painting for sale to outsiders was already getting under way in Papunya and in other communities to the north. The idea eventually spread, and Angkaliya branched out from her craft work. She was encouraged to paint by the Maruku Arts centre at Mutitjulu near Uluru. Her first canvases were large desert landscapes, animal-filled. By this stage, a new outstation had been set up further west, at the end of the Mann Ranges, much closer to her childhood home: this was tiny Nyapari, base camp for many of the modern desert painting movementâ€™s most admired and most collected stars.

Angkaliya moved there and started painting at Tjungu Palya, the little art studio that had just opened its doors. The co-ordinator was Amanda Dent, who was well-versed in desert traditions and had worked with grave old men and women in communities nearby. Dent had a fair idea what kind of canvases to expect: deep reds and ochre colours, icons, symbols, explosive, free-form dots and whorls. Then Angkaliya brought her first works in.

What came from her corner of the studio was something rather different: scenes with expressionistic birds and lizards, witchetty grubs and grinding stones, all viewed from above, all depicted lovingly, in great detail, their forms choking the painted surface. Each of her canvases was Â­executed in whites and blacks and creamy colours, pleasing in effect and completely representational.

It was the high time of the Â­desert painting craze, and Tjungu Palya was a hot art centre. Collectors wanted the new-look tradiÂ­tional works from Nyapari â€” familiar desert colours, desert imagery and themes.

What to do? Dent realised she had a true original on her hands, and began slipping Angkaliyaâ€™s works into Tjungu Palya group shows. She would enter her in the big painting awards, and the pieces stood out. To untutored eyes, they seemed charming, almost naive. She began to gain a following. Events took their course: the art boom faded away, the best-known artists died, but Angkaliyaâ€™s work came into prominence.

They had their purpose. They were both history paintings and knowledge paintings: they were depictions of a way of being in the world. Depictions: that had been the initial stumbling block.

Western desert artists werenâ€™t supposed to paint images of plants and creatures; their canvases were mysterious and Â­beyond decoding. Angkaliya was offering something much more immediately readable, but for their closer students the Â­surfaces of her works masked a swirling depth. The pieces had a strange shimmer to them that stemmed from the artistâ€™s unusual technique. No repetitious dot-making with sticks for Angkaliya: she used cut-back brushes and scored the paint surface with scratching marks. The result was a rough texture that held light back and seemed full of density. 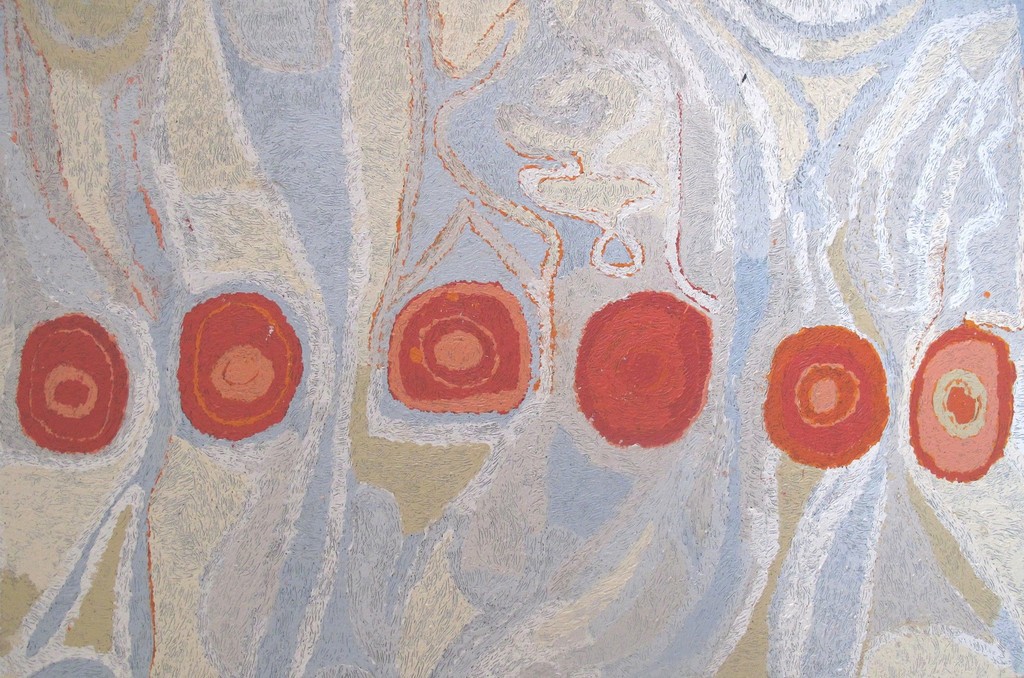 Its effect could be varied, to striking effect. If the painted ground of one of Angkaliyaâ€™s works is thick and dark, the scourings simply darken it further; if the paint is light and lightly applied, the marks seem like a screen hiding what lies beneath. This method allows her to sketch out submerged shapes in her fields of colour. Her scratches can suggest the lines of sand dunes in her country, but there may also be a second contour lurking: a bird in flight, perhaps, a bush flower or even a humped camel, like the one that spat on her years ago and turned her hair from black to grey overnight.

So things were for Angkaliya: there was a niche for her in the market, she was a fixture in Tjungu Palyaâ€™s shows, she was an artist who had fans rather than mere collectors, and her canvases were instantly recognisable. It was quite common for art buyers with experience of desert life to buy multiple examples of her works.

Then, perhaps seven months ago, a shift in her painting style began. The second art co-ordinator at Nyapari, Jo Byrne, watched closely. Now the representational elements receded to the background: in the colour fields, one could make out more and more the waterholes and tracks and creek lines that had always been present, half-submerged. They became the principal features in the works. It was a drastic visual progression: the landscapeâ€™s bones and sinews standing out.

In the main painting room at Tjungu Palya today, Angkaliya is at work on a large canvas: four circular shapes in purple porphyry set on a bright white ground. â€œI see the colours in the earth and I put them in,â€™â€™ she says. â€œEverything is colours that Iâ€™ve seen and that I remember.â€™â€™ But now the marks on the canvases are becoming softer and more elusive, and as a result they entice and lure the eye.

That bright curve inside the whitish colour field: is it an animal form buried in the landscape or a watercourse or a mere division line in a patterning of paint? Angkaliya may seem to be working right on the radiant edge of Â­abstraction, but for her the narrative she holds inside her head remains plain: â€œItâ€™s the same story: these are the sisters, women, sitting down and drinking from the water in the rockhole, and they see that man watching them, Wati Niru.â€™â€™ It is, in other words, a scene from one of the favourite song-cycles of the western desert, the narrative of the Seven Sisters, reimagined in Angkaliyaâ€™s style: â€œThey were dancing there, beside Niru, until he flew away â€” and I havenâ€™t put him in the picture yet, but perhaps I will.â€™â€™

She turns back to her work and her cut-back scoring brush, and bends over the canvas: â€œIâ€™m very happy when Iâ€™m here, painting. I like to remember the creeks we used to walk along, and the plants and trees there in flower: the birds, the dingoes, the lizards that were everywhere, the bush caterpillars. I like to bring them back inside my mind. I use this colour sometimes, this white one, because itâ€™s the same colour as a bush mouse, and I remember seeing them everywhere.â€™â€™

An art of nostalgia, or memory? Not only: it is an art of transmission as well. Angkaliyaâ€™s daughter, Helen Curtis, is a keen student and developer of her motherâ€™s lead in paint. Both the animal canvases and the abstract seeming colour fields record a particular way of looking and then bringing impressions into a resolved and balanced whole.

In the Nyapari studioâ€™s small stockroom, alongside new examples of the grand, deep-red arc and dot works that made Tjungu Palya the most prominent of all the desert art centres, lie a handful of Angkaliyaâ€™s newest pieces â€” bold, experimental, teetering on the frontier where form dissolves.

At 85, she is both strong and strong-willed: she walks through the fierce summer heat from her home to work at the art centre and back again each day: she is Â­always the first to jump up into the front seat of the troop carrier, digging stick in hand, when her family group heads out on hunting trips. Now she is the one teaching young children. For age, in the desert world, is not a burden but a blessing: an indicator of knowledge and distinction, a platform for advances in understanding the order of the world.

Angkaliya bends to her canvas: sights, shades and sounds far off in time come back to her, and live once more in paint.

The above is an article written in The Australian