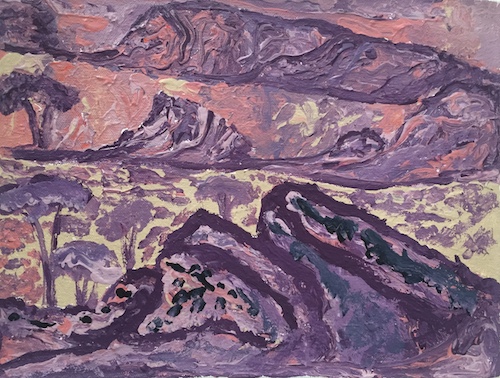 Adrian was born at Papunya in 1962. He went to school in Papunya and remembers Geoff Bardon as a school teacher and working alongside the early Western Desert painters. Adrian’s fathers’ country travels from west of Walungurru through Karku at Nyirrpi to Warlurkurlangu at Yuendumu. His father, Jampitjinpa, lived at Mount Doreen close to Yuendumu and later worked at Papunya as a Gardener and Builder. Jampitjinpa is a brother to the late Darby Ross Jampitjinpa, sharing the same mother and father. Adrian’s mother is the late Eunice Napangardi, a well known painter herself. It is her country, Yalpirakinu, that Adrian paints.

Adrian joined The Bindi Mwerre Anthurre Artists in 2002. He is a landscape painter and uses a predominantly restricted palette. His paintings consistently refer to the desert mountains, ridges and trees which are part of Yalpirakinu. His brushwork is loaded with energy, drama and memories. He is a deliberate and thoughtful painter; reworking, pushing and pulling the image to completion. (Bindi website)