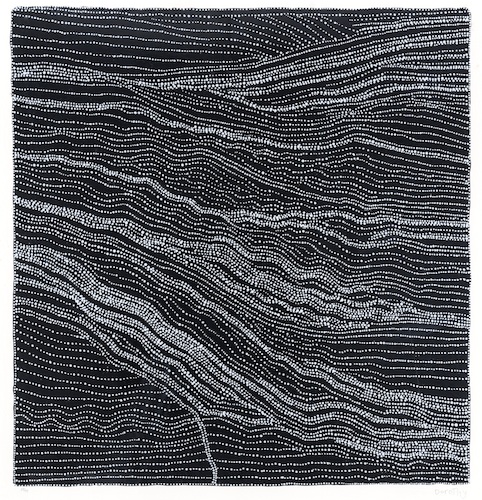 Dorothy Napangardi (c.1950-2013) was the master of movement. Her dotted representations of the landscape around her country are truly captivating and have made her one of the most well-known Australian Aboriginal artists. Dorothy had great success both in Australia and overseas, and some of her many achievements include winning the National Aboriginal and Torres Strait Islander Art Award in 2001, a retrospective exhibition at the Museum of Contemporary Art in 2003 and being included in the Sydney Biennale in 2012.

Dorothy was born in the early 1950s and her country is Mina Mina, which is about 400km North West of Alice Springs. Mina Mina is the site of an important rock hole and there are many Dreaming stories associated with this country. Dorothy was one of around 3,000 Warlpiri speakers who lived in or are originally from the Tanami Desert region of Central Australia.

Whilst Dorothy had little 'formal' schooling, she was well versed in the Jukurrpa (Dreaming) narratives and has a deep knowledge of her country. Her father was also a senior law-giver. Dorothy grew up 'bush' with no exposure to white man until her family moved to the Yuendumu settlement.

In 1987 Dorothy began painting and soon found a highly original voice and style. Her work revolves around dotted representations of the landscape around Mina Mina. They explore different and intricate representations of its salt pans and sand hills. Whilst Dorothy does sometimes use colour, it tends to be only in a subtle and minimalistic manner. Her art concentrates on movement to capture the viewer. Christine Nicholls, a well-known curator and writer has stated that Dorothy Napangardi's success as an artist lies in her ability to evoke a strong sense of movement on her canvases. Nicholls explains that she achieves this effect because of her remarkable spatial sense and compositional ability.

Dorothy has had numerous solo and group exhibitions both in Australia and overseas. Her art is in the collections of several museums, including the National Gallery of Australia, the Linden-Musum in Stuttgart Germany, The Kelton Foundation in Santa Monica USA, The Vroom Collection in the Nertherlands and The The LeWitt Collection in Connecticut, USA.

Dorothy loved to go hunting and walking on her country. She loved to look and listen to her country and this provided the inspiration to paint. Through painting, sitting down and singing and remembering, Dorothy explained that she felt a closer connection to her country.