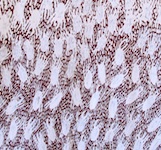 Galuma is the surviving daughter of the great Narritjin. Galuma was one of the first Yolngu women to be instructed to paint (by her father) the sacred clan designs that were previously the domain of high ranking men.

As a participant in the groundbreaking exhibition â€˜Buwayakâ€™ at Annandale Galleries in 2003 and a winner of that yearâ€™s Best Bark painting prize at the Telstra Aboriginal Art Awards her significance cannot be overstated. Her health problems have not stopped her from painting or living in the remote homelands of Dhuruputjpi, Djarrakpi or Yilpara. She is a fierce advocate and mainstay of homeland life.

Her importance was acknowledged by two solo shows at Annandale Galleries in 2007 and 2014.