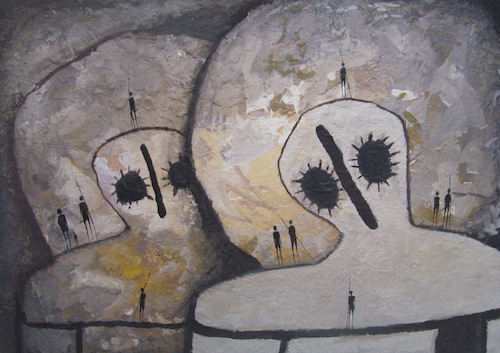 Hughie Ahwon is an Aboriginal man of Djubudja skin. His people are Warrnambool/Wunambal and Kwini tribe from north eastern Kimberley region. He carries on the artistic tradition of his people as has always been done passed from generation to generation. He started to paint to share what he had been taught about his culture. He paints with ochre and mixed medium.

Hughie was born on Creswell downs Station in the Barkley tablelands NT in 1965. His father was a stockman from Spring Creek WA and his mother was from Borroloola NT. Hughie was raised in Wyndham.

Hughie started painting in 2007 inspired by the skilled boab carvers in Wyndham. His mentor was Octa Carroll (father of senior ochre artist Tommy Carroll). Hughie has been represented by Waringarri Artists since 2008.