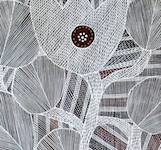 Malaluba has seven children, four daughters and three sons. She grew up in Numbulwar and moved to Yirrkala as a young mother.
Father was Gumuk Gumana, mother was Marratj Gurruwiwi. She moved with them to Gangan early in the homeland movement and has lived there ever since.
A very fine exponent of marwat- the cross hatching technique using a â€˜hair brushâ€™. Malaluba mainly paints her motherâ€™s GaÌŠlpu clan designs of dhatam (waterlilly), djari (rainbow), djaykung (filesnake) and wititj (olive python). From 2006 onwards her art centre encouraged her to produce larger and more complex works to fully explore her fluid and spontaneous hand. She embraced this opportunity wholeheartedly and tapped a vein of prolific production. An exhibition of her bark and hollow logs sold out in July 2008 at Niagara Galleries in Melbourne. This was followed by successful exhibitions at Cross Art Projects and Seva Frangos Gallery in Sydney and Perth respectively. Her larrakitj were on permanent display in the AGNSW through 2011. She featured at the Annandale Galleries solo show Prism in 2012. Her win in the 2013 NATSIAA Best Bark category signalled the recognition of her talent by a wider audience.