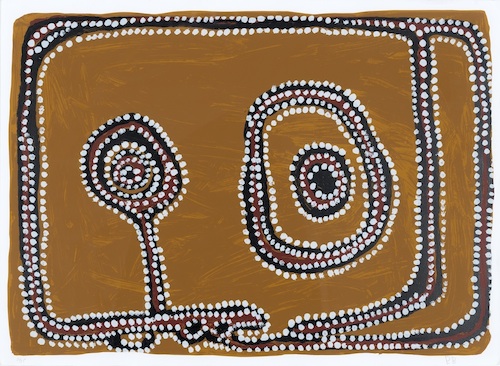 Nyunkuny, commonly known by his nick name "Kuwumji" and also by his "gardiya" name Paddy Bedford, is a Gija law man of Jawalyi skin who was born at Bedford Downs Station in the East Kimberley around 1922. A couple of years before his birth, a group of his Gija relations had been murdered by strychnine poisoning in retaliation for the killing of one milking cow near Mt King, an emu dreaming place to the west. People moved out to the government station at Violet Valley but by the time of the artist's birth had been persuaded to return to work at Bedford Downs. When young he worked as a stockman for the usual tea, flour and tobacco on old Greenvale and Bow River Stations before returning to work on Bedford Downs. He and his family left Bedford Downs and moved to Warmun (Warrmarn - Turkey Creek) when a station manager killed all the camp dogs.

As a senior law man, he has been involved in painting as part of ceremony all his life. He began painting on canvas for exhibition after Freddie Timms set up the Jirrawun Aboriginal Art group at Rugun (Crocodile Hole) in 1997. His work in the "Turkey Creek" style with expanses of plain ochre with a few well-chosen shapes and sparse lines marked by white dots, depicts the bones of the landscape in which he has spent a life time. His paintings combine important family dreamings, such as emu, turkey and cockatoo with roads, rivers, the living areas for traditional life and stock camp life, stock yards and country visited while mustering. He has been hailed as the "new" Rover Thomas, although he was born a few years before him.