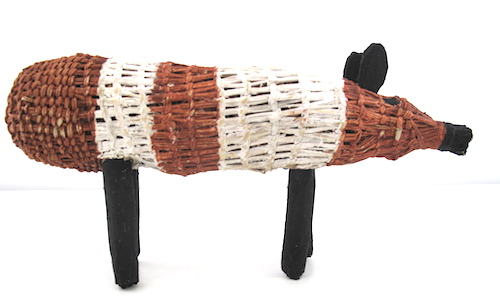 Biography
Penny is from the Wagilag clan which is from Southern Arnhem land. Although their country is to the South and West Penny and her husband Tony Cameron have settled within the heart of YolÅ‹u country at Gapuwiyak also known as Lake Evella. Pennyâ€™s law allies strongly with the Marrangu and there are important Djambarrpuyngu connections here too. Tony and Pennyâ€™s diverse spiritual background and experiences mean that they have a unique insight into the identity of a much wider range of species than the average YolÅ‹u. But at the same time it makes them very circumspect in claiming any sacred authority to represent the full sacred identity of these species. Over years living and working at Gapuwiyak they have developed an almost ecological style informed, but not revealing, their sacred understandings. In early 2016 they relocated to Yirrkala for ceremonial reasons and met Edwina Circuitt who has just commenced as a co-ordinator at Buku-Larrnggay Mulka Centre. Perhaps in response to her enthusiasm the work flowed describing species that had never been represented in Yirrkala before.