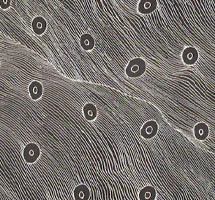 Robert has been developing his artistic practice at Mimili Maku Arts since 2005, and been employed as an art centre assistant since 2010. He participated in the Westfarmers Indigenous Leaders programme in 2013 and has lead the way for the arts worker programme at Mimili Maku Arts. In his role as an arts worker Robert has developed a strong skill set in photography which he has skillfully incorporated into his artistic practice.