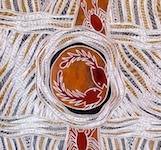 Son of Dhakawal. Assisted Gawirrin Gumana AO on his NATSIAA First Prize pole. After his fatherâ€™s death he has been raised by legendary elder and artist Gawirrin, his fatherâ€™s brother.

Yinimala has patiently assisted his uncle or classificatory father with the cross hatching on many of his major works. He has also travelled to exhibitions with him and has been educated in the Yolngu law in ceremony. Accordingly the maturity of his artwork and manner is striking for one so young.

He was one of the five artists chosen by elders and the Art Centre to represent their generation in the â€˜Young Gunsâ€™ show at Annandale Galleries in June 2006.

He has been annointed as a future Dalkarra/Djirrikay (leader of Dhuwa and Yirritja ceremonies). He is a member of Buku-Larrnggay Mulka Centreâ€™s managing Committee.

In 2008 he was again selected to exhibit in Young Guns II. His first child was born around this time.

In 2009 he was one of the ambassadors chosen to visit Canberra and argue the case for homelands with federal politicians.

In 2011 he was elected Chairperson of Buku-Larrnggay Mulka Centre.