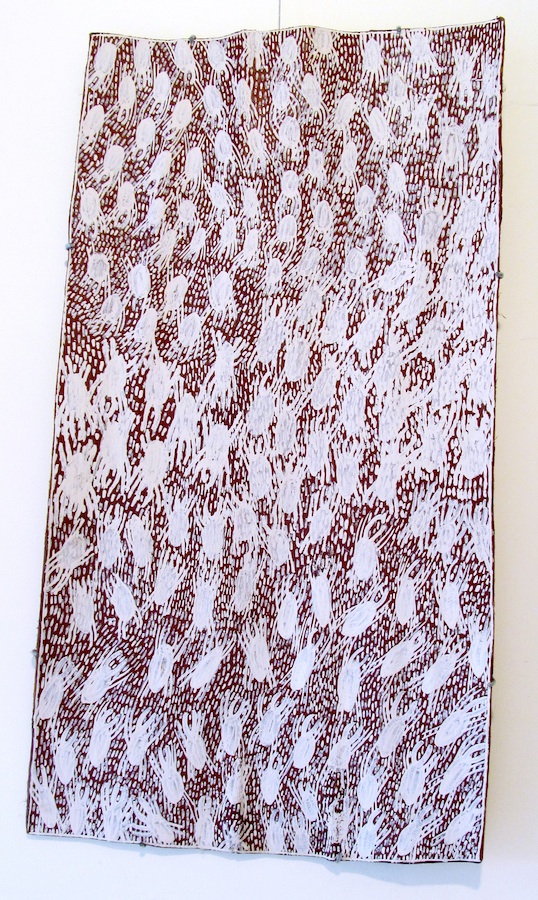 Galuma produced this work with reference to her own country at Djarrakpi which is at the base of Cape Shield, the northern perimeter of Blue Mud Bay. This Manggalili country is also site of one of the Ancestral ceremonial/burial grounds called the Yingapungapu. TheYingapungapuÂ is a low relief sand sculpture designed to keep any contamination of death at bay as traditionally the body of the deceased was placed within it for initial mortuary rites, to cleanse the bones of dangerous spirits held within the body tissue.

A metaphor for this action of cleansing is utilised by the Manggalili in their sacred paintings by way of depicting Mirriya or Gunyan the sand or ghost crab picking the bones of a fish carcass on the beach. Contemporary Manggalili on the beaches of Djarrakpi put their food scraps in one place when at camp – the secularYingapungapu.

This painting shows the totemic Mirriya which feeds on the Ancestral remains of the parrot fish Yambirrku. The minyâ€™tji or sacred clan design for the sandscapes of Djarrakpi both adorn and surround the crabs. In traditional mortuary ceremony for this clan the last act is to catch and eat Yambirrku and dispose of the bones in the ceremonial sand sculpture for the crabs to pick clean overnight.

This work is clearly part of the genre of works which she produced in 2013 which emphasise large fields of crabs.

Galuma is the surviving daughter of the great Narritjin. Galuma was one of the first Yolngu women to be instructed to paint (by her father) the sacred clan designs that were previously the domain of high ranking men. As a participant in the groundbreaking exhibition â€˜Buwayakâ€™ at Annandale Galleries in 2003 and a winner of that yearâ€™s Best Bark painting prize at the Telstra Aboriginal Art Awards her significance cannot be overstated. Her health problems have not stopped her from painting or living in the remote homelands of Dhuruputjpi, Djarrakpi or Yilpara. She is a fierce advocate and mainstay of homeland life. Her importance was acknowledged by two solo shows at Annandale Galleries in 2007 and 2014.