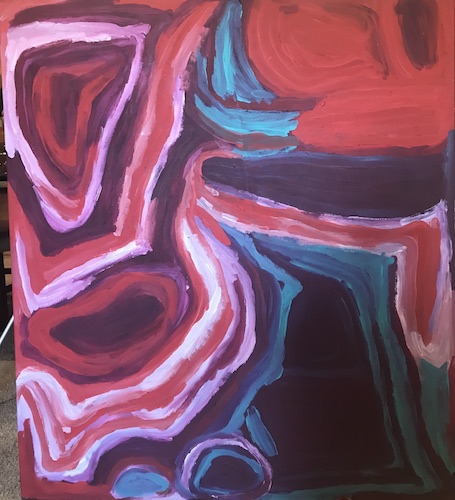 Bugai is a Kartujarra woman and a senior custodian of the lands surrounding Kunawarritji (Canning Stock Route Well 33). She was born in the 1940s at Pukayiyirna, on present day Balfour Downs Station, though her parents soon travelled northward with her through Jigalong and Nullagine toward Kunawarritji. She grew up, walked and hunted with her parents, younger sister Pinyirr Nancy Patterson (dec.), and extended family, primarily travelling around the eastern side of the Karlamily (Rudall River) region and along the midsection of the Canning Stock Route, from Kartarru (Canning Stock Route Well 24) to Kunawarritji (Canning Stock Route Well 33). As a young woman Bugai travelled up and down large tracts of the 1850km long Canning Stock Route, where she and her husband met and walked with cattle drovers. In 1963 Bugai’s family encountered the surveyor Len Beadell, who was then grading roads for the Woomera Missile Testing Range. He gave the family flour, which Bugai was able to use to show her relatives how to cook a simple damper (flat bread). Bugai had herself been taught how to bake with flour during her earlier interactions with drovers in her travels on the Stock Route. Shortly afterward Bugai, her husband and the extended family group she was with at the time together decided to move to Jigalong Mission. There they joined many other relatives that had already travelled in from the desert following a prolonged and severe drought. They were some of the last Martu to leave the desert. From Jigalong Bugai moved to Aboriginal communities in Strelley, Punmu, and Parnngurr before relocating to Kunawarritji Aboriginal community in more recent years, where she continues to live today. There she was taught to paint by renowned artists Nora Nungabar (Nyangapa) (dec.) and Nora Wompi (dec.). The three women painted together as often as possible. For a long time Bugai wove baskets, watching the other women painting. Later, she explained that she had been uncertain how to begin. Today Bugai is considered one of most established Martumili Artists, and is known as a master of colour, gesture and subtlety. Her self reflective works are layered with distinctively delicate brushmarks, with subtle colour changes representing landmarks, water sources, and desert flora. Bugai's work was selected for the 2019, 2018 and 2013 Telstra National Aboriginal and Torres Strait Islander Art Awards, the 2012 Bankwest Contemporary Art Prize and Hedland Art Award, and the 2010 Western Australian Indigenous Art Award. She has held regular solo exhibitions, and her work has been acquired by several major institutions in Australia, including The National Museum of Australia, the National Gallery of Victoria, and Queensland Art Gallery’s Gallery of Modern Art. In August 2021 she was awarded The Best Painting Award in the National Aboriginal and Torres Strait Islander Awards Born c. 1939