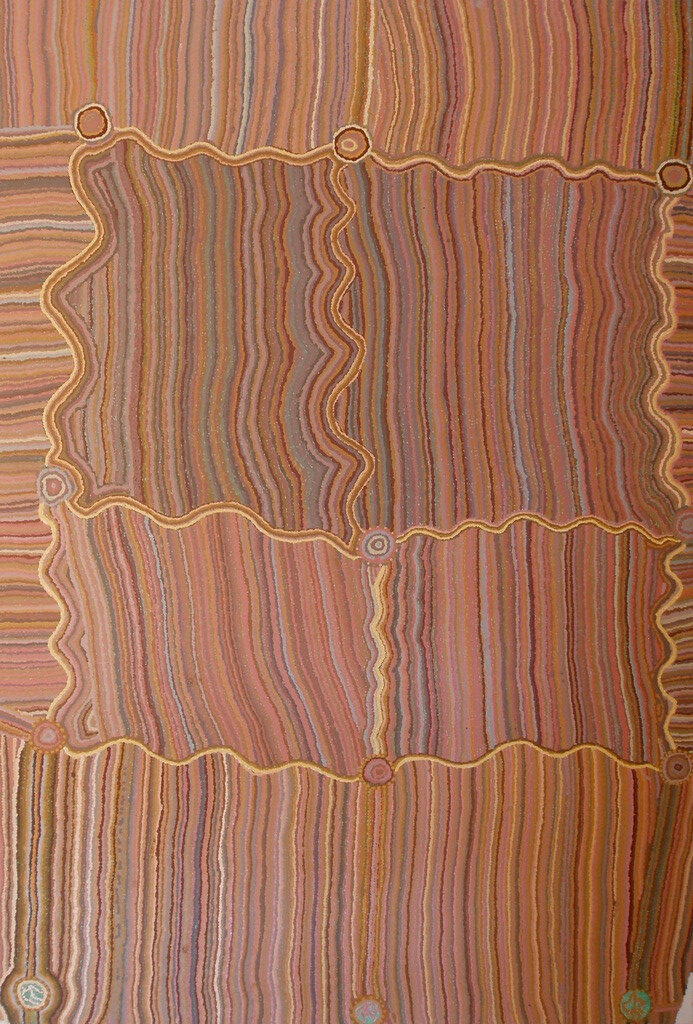 Paintings depict the Tjukurpa, the law and stories of ancestors. Anangu (Central and Wesern Desert Aboriginal People) have responsibilities for the protection and teaching of different Tjukurpa and there are strict protocols for the imparting of knowledge. The dotting technique has evolved with the need to adapt sacred expressions of Tjukurpa for public viewing and as a depiction of te desert landscape.
This painting relates to Sandy’s traditional ancestral country around Kaltukatjara (Docker River)in the southwest of the Northern Territory. It is heavily coded reference to sacred and restricted mens law: Watiku Tjukurpa at Kikinkura, belonging to the Wintalyka or Mulga seed.
Part of this creation law extends east through Uluru when the Wintalyka men became involved in a feud with Mala, or Rufous Hare Wallaby people who travelled from the north to perform ceremonies at Uluru. When an invitation was extended to them to attend similar ceremony in the west, the Mala men caused great offence by their refusal.
The powerful senior Wintalyka men created an evil spirit, Kurpany, a giant magic monster dingo to attack and chase the mala away to Ulkiya in the south. It was able to transform itself at will into any shape or form it chose to exact revenge on their behalf.
Sandy says his painting also refers to a little spoken about aspect of Uluru known at the Tjitji Kutjara or Two Children about two boys playing in the mud.