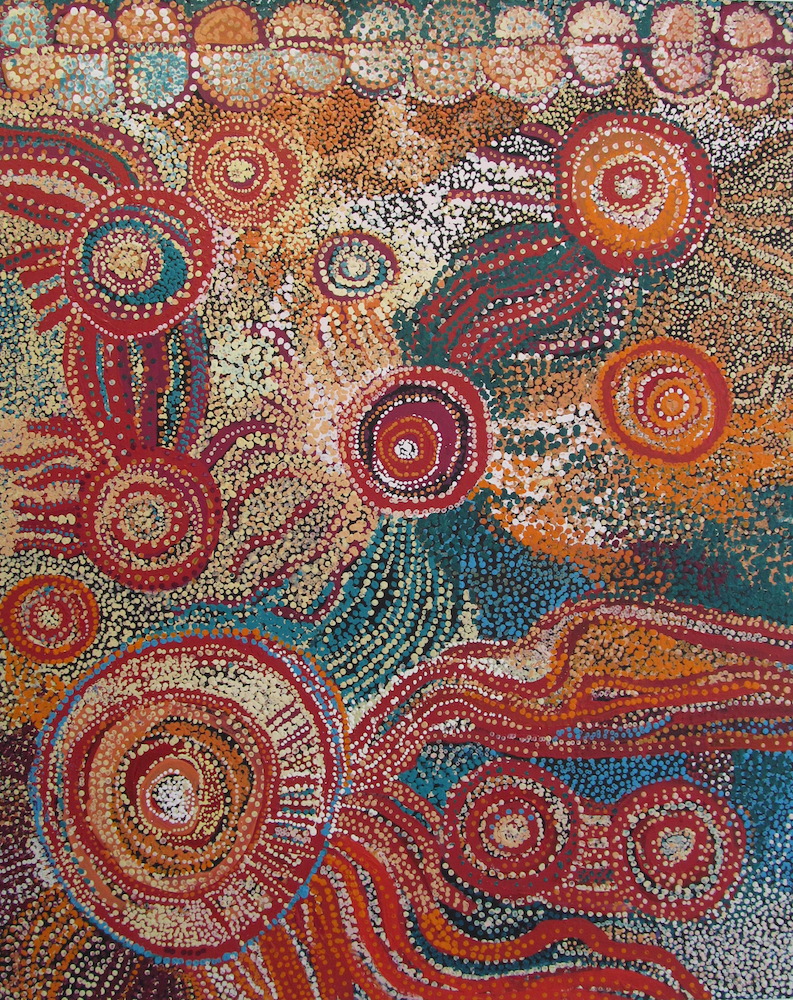 Manyitjanu has painted tjulpuntjulpunpa – the wildflowers of the desert country. Her unique style, characterised by bold and energetic use of colour and loose brush work captures the vibrancy and colourful effect the desert flowers create en masse in their wild state.
This abstract work is inspired by, and reflects, the importance of connection to traditional country.

Manyitjanu Lennon is a senior aboriginal elder who holds extensive cultural knowledge. She lives at * Watinuma Community and works at the Kaltjiti Arts Centre. Lennon was originally from her mother’s country, north of Watarru around Aralya and Kunytjanu. Like many people of her era, Lennon was born in the desert when her family were living a traditional nomadic life.

Manyitjanu Lennon is from Watinuma Community on the Anangu Pitjantjatjara/ Yankunytjatjara Lands, 350km SE of ULURU. Originally she was from the north of Watarru around Aralya and Kunytjanu. Like many people of her era, Manyitjanu was born in the desert when her family were walking around, living a traditional nomadic life. After ceremony time, and as an early school age girl, her aunties took her from Watarru back to Ernabella. She later returned to Pipalyatjara with Winifred Hilliard many years later when they were helping people out west, taking them clothes and food. She also learnt numerous arts and crafts such as making moccasins and cushions out of kangaroo skins, spinning and dying wool, batik tie dying and wool carving (punu) at the Ernabella Arts Centre. Currently she is involved in basket weaving and painting on canvas. She married and moved to Fregon when it was established in 1961. She was involved in the Fregon Choir, helped set up the Fregon Craft room, as well as the Fregon School with Nancy Sheppard. She has five children and four grandchildren. Manyitjanu has recently returned to the arts centre to paint the stories from her country including the Seven Sisters and Mamungariâ€™nya, She also paints landscapes from around Aralya and Kunytjanu. Her style is quite unique, characterised by bold and energetic use of colour.