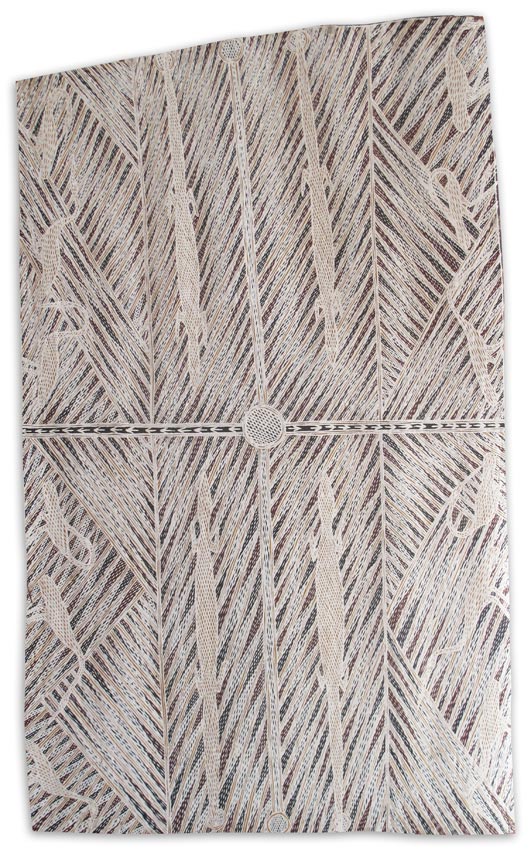 This painting depicts the travels of the major ancestors of the Dhuwa moiety, the Djangâ€™kawu Sisters. In ancestral times, the Djangâ€™kawu Sisters travelled over land belonging to all Dhuwa clans creating clan groups and naming country and species belonging to each clan. They sang the first sacred songs about the land-forms and creatures they named. These songs are sung by Dhuwa clans-people in ceremony today. This painting refers specifically to the journey through |aymil country.

The two Djangâ€™kawu Sisters are represented in the painting by goanna called Djanda. The sisters travelled carrying digging sticks called Mawalan or Ganingiri. These digging sticks were plunged into the ground resulting in the formation of freshwater holes. The circular design central to the painting is one of these waterholes called Mathi. Horizontal lines running away from this waterhole represent freshwater streams flowing out from the water hole source. The minyâ€™tji, design either side of Djanda is a Nyaymil clan design representing a freshwater reed which covers the surface of freshwater billabongs in Nyaymil country.

In this painting the design indicates that the leaves are sitting still on the surface of the water undisturbed, with the goanna hidden underwater. The arrow marks indicate the tracks of a Plains Turkey or Bush Bastard which the Djangâ€™kawu named Walpurrungguâ€™ or Buwata. These tracks may also refer to the travels of the younger brother of the Djangâ€™kawu Sisters who shares the name Buwata.

The waterhole in middle of the painting is given the general term Milngurr, which is used to describe sacred water holes created by the Djangâ€™kawu. These waterholes are thought of as the source of Dhuwa moiety peoples. When the Djangâ€™kawu created these waterholes, in ancestral times, the first people of Dhuwa moiety clans were born at these sites. Milngurr is still closely related to Yolngu belief about conception as â€˜spirit childrenâ€™ are said to reside in these water holes waiting to be born.