Sonia paints the sandy billabong country along the stretch of the Fitzroy River that runs directly behind the community. After the floodwaters recede, there are billabongs that hold a plentiful supply of parlka [barramundi], kurlumajarti [catfish] and bream. She paints gapi [fish], parrmarr [rocks] where the fish is cooked, ngurti [coolamon] and a karli [boomerang]. Sonia began painting at Mangkaja Arts in the early 1990s working mostly on paper. Since 2008, Sonia has been working predominantly on canvas, exhibiting in numerous group shows. Sonia had an overwhelming response to her first solo show in 2009 and has since established herself as one of Mangkaja Arts leading contemporary artists. 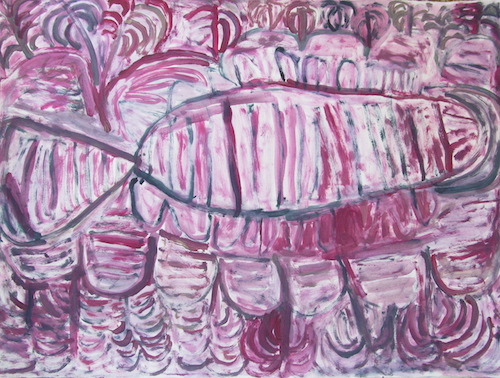